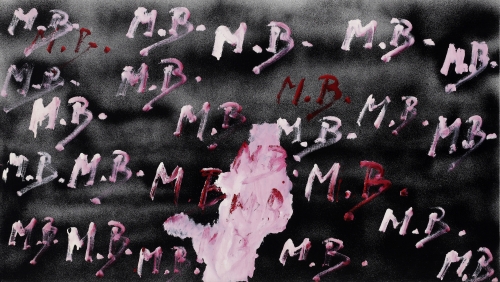 Michael Werner Gallery is pleased to present Marcel Broodthaers: Écriture, an exhibition of major works by one of the most influential artists of the post-war period. The exhibition brings particular consideration to the importance of writing within Broodthaers’ complex and diverse oeuvre.

Marcel Broodthaers was born in Brussels in 1924. He began writing poetry at a young age, published his first poems in 1945, and by 1947 was aligned with the Belgian surrealists. Broodthaers experimented also with film, photography and journalism during this time. Broodthaers continued to write, struggling in near obscurity, for almost two decades before turning to the visual arts in 1964. "Pense-Bête", Broodthaers’s first artwork, was a deeply symbolic sculpture comprising numerous unsold volumes of the artist’s poems embedded in a mound of plaster. A dramatic gesture of conceptual complexity and material restraint, "Pense-Bête" contains the essential artistic concepts that would drive all of Broodthaers’s subsequent work as a visual artist. Writing, both as a physical gesture and as a conceptual enterprise, is an elemental feature of Broodthaers’s sensibility, marked as it is by sharp wit and wordplay and an affectionate irony towards the conventions and institutions of contemporary art.

Broodthaers continually invented new ways of giving form to language by working across mediums of poetry, sculpture, painting, printmaking and film. Marcel Broodthaers: Écriture brings together seminal works across a range of mediums to demonstrate how Broodthaers’s poetic sensibility remained essential throughout his life’s work. The exhibition includes works in film, collage, sculpture and drawing, as well as one of the only paintings by the artist. The late work, "Dites Partout Que Je L'Ai Dit (Say Everywhere What I Have Said)", rarely seen since its creation nearly forty years ago, forms the core of Écriture. Conceived and first exhibited by Broodthaers as a room for his 1974 exhibition Eloge de Sujet (Eulogy of the Subject) at Kunstmuseum Basel, Dites Partout is one of the most important of Broodthaers’s "décors" and is a prescient precursor to contemporary practices of installation and relational aesthetics.

On February 14 The Museum of Modern Art opens the first Broodthaers retrospective organized in New York. The exhibition will continue to Museo Nacional Centro de Arte Reina Sofía, Madrid, in October 2016, and to Kunstsammlung Nordrhein-Westfalen, Düsseldorf, in 2017.

Marcel Broodthaers: Écriture opens 28 January and is on view through 26 March. Gallery hours are Monday through Saturday, 10AM to 6PM. For more information please contact the gallery at press@michaelwerner.com.