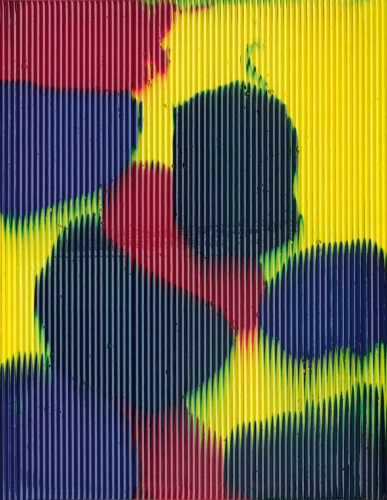 Michael Werner Gallery is pleased to present Sigmar Polke: Lens Paintings, a major exhibition of new works by one of the most important artists of the post-war generation.

The Lens Paintings are a new development for an artist whose career is characterized by over 40 years of radical invention in painting. The conceptual framework of the Lens Paintings is grounded in theories set forth by Johann Zahn in his 1685 book, Oculus artificialis teledioptricus, sive telescopium (The Teledioptric Artificial Eye, or Telescope). Zahn, a monk in the Premonstrate Order, was an important figure in the development of the camera obscura, and his "teledioptric artificial eye," a forerunner of the telephoto lens. According to Zahn, every luminous object in the universe varies in appearance depending on the viewer's position.

Polke's interest in this idea was first manifest in the artist's commission for the reopening of the Reichstag in Berlin, for which he created a series of large, three-dimensional lightboxes. Lit from behind, images seen through the grooved surfaces of these lightboxes change as the viewer moves past them. This led Polke to devise a system in his studio allowing him to create, in paint, a corrugated refractive surface that mimics an industrially manufactured lenticular lens. This painted "lens" generates a variety of distortions, mutations and spatial illusions when seen from different viewpoints.

Sigmar Polke: Lens Paintings is comprised of nearly 30 paintings representing over six years of the artist's experiments and explorations in painting. A selection of Lens Paintings was shown in 2007 at the Museum für Gegenwartskunst in Siegen, Germany, on the occasion of Polke being awarded the prestigious Rubens Prize for painting. Since that time the artist continued to develop and refine the series. The Lens Paintings were shown in their entirety earlier this year at The Arts Club of Chicago. A full-color catalogue documenting the complete group of paintings was published by The Arts Club of Chicago, in cooperation with Michael Werner Gallery, and features a text by art historian and curator Chrissie Iles.

Sigmar Polke: Lens Paintings is on view at Michael Werner Gallery from 6 May through 19 June 2009. Gallery hours are Monday through Saturday, 10 am to 6 pm. For more information please contact the gallery at press@michaelwerner.com.