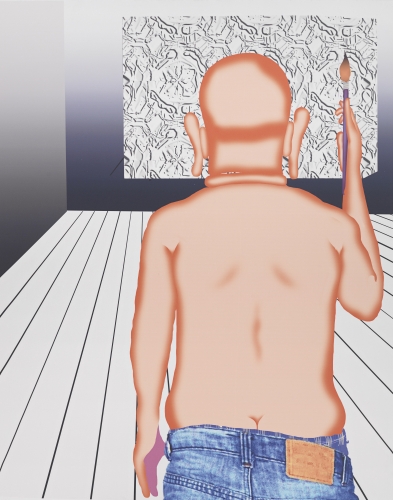 Michael Werner Gallery is pleased to present Morning Zoo, the first solo exhibition in London of works by Michael Williams.

Drawing is a constant practice for Williams and forms the foundation for his work in painting. The works on view at Michael Werner developed from a challenging and expanded approach to the drawing process. Williams began the new works by drawing on a tablet and editing these compositions in a computer. The resulting pictures are mechanically printed. Williams later embellishes the printed picture with paint, or he may not; the printed canvases can serve as starting points for painterly explorations or may remain as autonomous finished works. This process of digital drawing and printing brings Williams' chaotic imagery to the fore, questioning the role of material reality in painting.

Michael Williams: Morning Zoo opens 20 November at Michael Werner Gallery in London and remains on view through 31 January 2015. The exhibition is accompanied by a fully illustrated catalogue featuring an interview between Michael Williams and Carroll Dunham. For more information, please contact the gallery at press@michaelwerner.com.