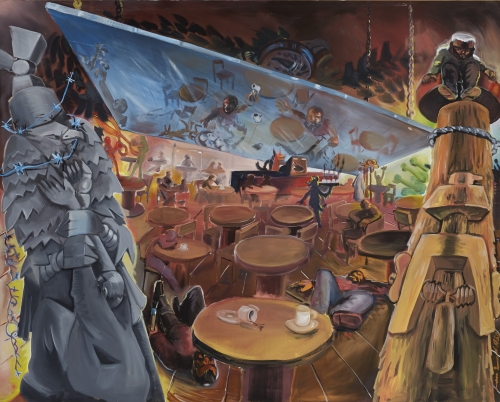 An epic series comprising hundreds of oils, many of them monumental in scale, Immendorff began work on Café Deutschland in 1977 and directed the full force of his creative power toward the series for nearly a decade. The "café" references the rich cabaret counterculture of Berlin and Paris in the pre-war years and is loosely based on the underground nightclubs Immendorff frequented. It is a highly conceptual space – part club, part theatre stage – in which a disparate cast of characters from all sides of the ideological struggle play their parts in a burlesque of politics, culture and identity. Café Deutschland is a contemporary form of history painting, unique for its grand scale and Immendorff's ambitious aim of reconciling his country's evolving identity and the labyrinthine complexities of the East/West divide. No other artist of the post-war period questioned so pointedly and relentlessly the post-war situation in Germany and its ramifications for European culture. Café Deutschland remains unrivaled for its complexity and depth as both a political and artistic statement.

Immendorff's first meeting with fellow artist A.R. Penck was a significant factor in the development of Café Deutschland. Penck at that time lived in Dresden in Communist East Germany and was barred by the authorities from publicly exhibiting his paintings; Immendorff, residing in the West, enjoyed near total artistic freedom. Despite the great differences in their respective situations, the two artists formed a bond based in common political causes and a shared feeling of artistic isolation. Their meeting and subsequent solidarity is chronicled in the first Café Deutschland paintings. These early paintings show Immendorff and his embattled compatriot working toward a unified German society, using art to bridge the cultural gaps between East and West and overcome the arbitrary barrier of the Berlin wall.

The politics explored in Café Deutschland were not isolated concerns for Immendorff, who throughout his life was deeply involved in the pressing issues of his time. Immendorff was especially concerned with questions around the role of the individual in contemporary society and within history at large. His need for an art of active cultural and political engagement can be traced to his studies with Joseph Beuys at the art academy in Düsseldorf. Immendorff at the time was a vocal opponent of the war in Vietnam and created several actions – which he termed LIDL – to voice his protest. In the early nineteen seventies he began two lengthy series of works, the so-called "Maoist" paintings and the Rechenschaftsberichte (literally, "accountability reports", meaning for Immendorff self-accountability, a kind of stock-taking of his thoughts and actions up to that point). Immendorff used these paintings to denounce the egoism of career artists, challenging himself and his fellow artists to use their talents in the service of societal issues over art for art's sake.

Major exhibitions devoted to Immendorff have traveled throughout Europe, Asia and the United States. Important exhibitions include Museum Boymans-van Beuningen, Rotterdam; Municipal Museum, The Hague; Museo Rufino Tamayo, Mexico City; Kuntsmuseum, Bonn; Kunsthalle Düsseldorf; and Neue Nationalgalerie, Berlin, among many others. Immendorff was awarded the Order of Merit from the Federal Republic of Germany in 1998. He lived and worked in Düsseldorf until his death in 2007.

Jörg Immendorff: Café Deutschland is on view at Michael Werner Gallery in New York from 11 September through 1 November and is accompanied by a full-color catalogue featuring texts by David Elliott and Siegfried Gohr. Gallery hours are Monday through Saturday, 10AM to 6PM. For more information please email press@michaelwerner.com.