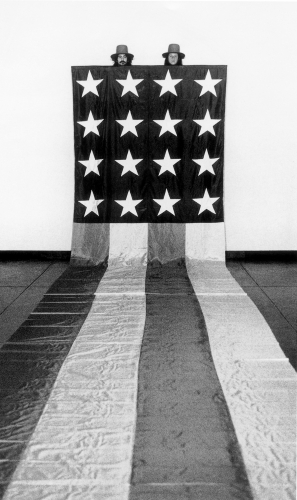 “SYMBOLS are sacred things: and one of the chief that every man holds dear is the national flag. Deep down in our nature is the strong emotion that swells the heart and brings the tear and makes us follow the flag and die round it rather than let it fall into the hands of an enemy. This is no new emotion, no growth of a few generations, but an inheritance from the ages before history began.

When man became what we know as man the need of a token distinguishing family from family occurred to him, leading him on to totemism, which in some of its aspects is practically heraldic. A special sign by which he could be known from others must have been adopted early; and from this, as a generalization of the totem, came the tribal symbols which in time developed into those distinctive of nations and took the form of the insignia from which we eventually derived our flags.

Around these venerable symbols memories gathered which made them emblems of the triumphs and sacrifices of the community: and the influence remains. We salute the Colours as we salute the King as the personification of the State. The Union Jack, the Tricolour, the Stars and Stripes, the Dannebrog are the pride of those born beneath them and tell of the glories of the past, the hopes of the future, and the duty, if need be, to die for the people of which the flag is the symbol.”

-from Flags of the World, Past and Present (1915) by William John Gordon, as selected by James Lee Byars in the 1986 catalogue The Philosophical Palace

Michael Werner Gallery, London is pleased to present an exhibition of two seminal works by James Lee Byars. “The Black German Flag” was created in Berlin during a 1974 fellowship with DAAD, the German Academic Exchange Program. Remnants of the Second World War and The Holocaust lingered in the divided city and profoundly influenced the artist. “The Black German Flag” can be read as an hermetic shroud, evoking the destruction and losses these events produced. The gallery will also present “The American Flag” (1974), which alludes to the controversial transition between Richard Nixon and Gerald Ford during the Vietnam War, a war which the artist was vehemently opposed to. Together, these works present Byars' aim to question the very nature of the flag, nationalism and conscience.

James Lee Byars was born in Detroit in 1932 and died in Cairo in 1997. He has been the subject of numerous gallery and museum exhibitions worldwide. Recent exhibitions include 1/2 an Autobiography, Museo Jumex, Mexico City and MoMA PS1, New York (2013-2014); The Golden Tower, Campo San Vio, Venice (2017); and The Perfect Kiss, Museum of Contemporary Art, Antwerp (2018).

James Lee Byars: Works 1974-1994 will open on 1 June and will remain on view through 28 August. Gallery hours are Tuesday through Saturday, 10AM – 6PM. Summer gallery hours begin 2 July and run Tuesday through Friday, 10AM - 6PM.  For more information, please contact the gallery at press@michaelwerner.com.