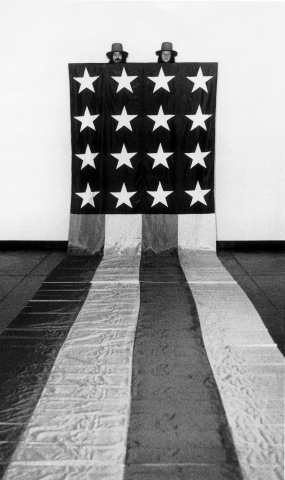 This presentation features one of the artist’s seminal works: “The American Flag,” which was used in the iconic 1974 film “Two Presidents.” The film, shot on Super-8 film and lasting only twenty-one seconds, depicts two participants dressed in red stovepipe hats holding the billowing, simplified American flag featuring sixteen stars and four red and white stripes. The figures in the film allude to Richard Nixon and Gerald Ford and their controversial transition in 1974 during the Vietnam War. This presentation is a rare opportunity to see one of the artist’s most poetic and politically-charged works.

VITRINE is located at 75 East Broadway Suite #216 in the New York Mart mall, beneath the Manhattan Bridge.  James Lee Byars: The American Flag is on view seven days a week from 9AM – 9PM. Please contact the gallery for more information.