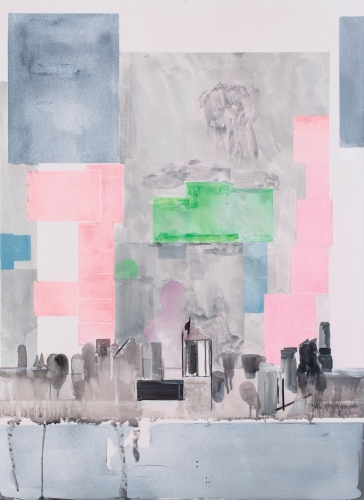 Michael Werner Gallery in New York is pleased to present Foreign Body, an exhibition of new paintings by Hurvin Anderson. This is Anderson’s second solo show with the gallery.

Hurvin Anderson's paintings depict places where memory and history converge. He works from drawings, photographs and his own recollections to re-imagine complex spaces emblematic of individual and cultural significance. Anderson's newest paintings move toward abstraction, suggesting boundaries and shifting viewpoints, creating a sensation akin to a flicker of memory. Raised in Birmingham, UK's African-Caribbean community during the 1970s Anderson's worldview was shaped by his immersion in two distinct cultures. Their intersection provides the artist a platform for painterly invention and subtle meditations on larger themes of social history and identity.

Hurvin Anderson: Foreign Body opens 4 November 2016 and will be on view through 14 January 2017. The exhibition will be accompanied by a full-color catalogue. Gallery hours are Monday through Saturday, 10AM-6PM. For more information please contact the gallery at press@michaelwerner.com.