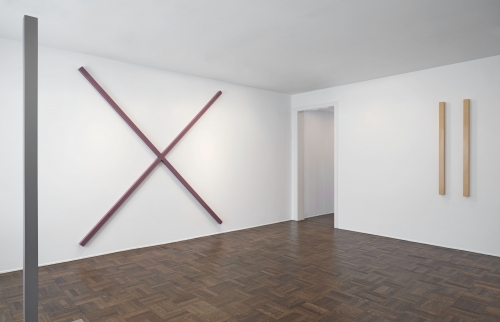 Michael Werner Gallery, New York, is pleased to present a solo exhibition by Italian artist Gianni Piacentino. The exhibition will feature a consistent body of work, following the development of Piacentino’s artistic career over the last fifty years, from the minimal objects developed between 1965 and 1968 to the present day.

Piacentino was one of the founding members of Arte Povera, a movement he abandoned early to pursue his own individual and maverick path. Working primarily in polyester-coated and painted wood, he maintained an unwavering commitment to manual skill and highly refined industrial materials. Piacentino’s early minimal sculptures transformed themselves into new shapes that celebrate the idea of dynamism and speed, recalling the vehicles that inspired his projects — motorcycles, monocycles, automobiles, and planes. Creating these works with the same degree of care and attention to detail as the industry puts into the production of these machines, Piacentino brings the highest level of handcrafted technique to his perfectly finished forms.

With or without wheels, free-standing or attached to the wall, his objects look like traces of an abandoned utopia. They may be metal-plated or finished in pearlescent automotive paints; they are accented by logos made from the artist's own initials or by words related to flight and racing. His works are rich with psychological and intellectual references, making visual comprehension of space and the sublimation of everyday objects that occupy it strangely unfamiliar. Erasing distinctions between individuality and standardization; painting versus sculpture; and everyday objects versus art objects, these boundless objects are distillations of Piacentino’s lifelong disruption of the status quo.

Born in 1945 in Coazze (Turin), Gianni Piacentino lives and works in Turin. His work has been featured in a number of solo and group exhibitions worldwide, most recently at the Fondazione Giuliani in Rome, Metropolitan Art Society in Beirut, Michael Werner Gallery in London, and Veneklasen/Werner, Berlin. In 2013, Piacentino was the subject of a large-scale survey at Centre d’Art Contemporain in Geneva. Other exhibitions include the Museum of Contemporary Art Chicago (2009), MoMA PS1 in New York (1997), Centro de Arte Reina Sofía in Madrid (1990), the Gesellschaft für Aktuelle Kunst in Bremen (1981), the Nationalgalerie in Berlin (1978), the Palais des Beaux Arts in Brussels (1972), the University Museum in Sydney and the Museum am Ostwall in Dortmund (both in 1971). He also participated in dOCUMENTA (6) in Kassel (1977), the XLV Venice Biennale (1993) and the Quadrennial in Rome (1973 and 2005). An upcoming solo exhibition curated by Germano Celant will open in November at the Fondazione Prada in Milan.

GIANNI PIACENTINO: WORKS 1965-2013 opens 10 September at Michael Werner Gallery in New York and remains on view through 31 October 2015. The exhibition will be accompanied by a full-color catalogue featuring a text by Andrea Bellini and an interview with the artist by Hans-Ulrich Obrist. Gallery hours are Monday through Saturday, 10AM to 6PM. For more information please contact the gallery at press@michaelwerner.com.