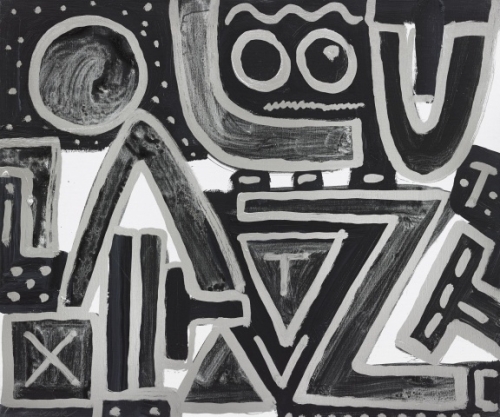 Michael Werner Gallery is pleased to present an exhibition of paintings by A.R. Penck. Between Light and Shadow brings together an entirely new group of works by one of the preeminent German artists of the Post-War period.

A.R. Penck’s iconic expressiveness continues to surprise. The now familiar gestural spontaneity and graphic intensity which characterize his work disguises the artist’s conceptual sophistication and unending intellectual curiosity. Between Light and Shadow presents a complex worldview which seeks to reconcile the role of the individual against larger systems of governance and control. Penck’s use of painting to investigate socio-political situations and the mechanisms of mass communication remains relevant today.  Between Light and Shadow expands upon Penck’s five decades of creative work in painting, sculpture, writing and music. Penck first achieved notoriety in the early 1960s with his boldly pared-down depictions of symbols and figures that slyly questioned the status quo in politically repressed East Germany. Penck’s visual lexicon of quasi-representational pictographs and linguistic fragments, which freely borrowed from abstraction and representation, evolved from keen interest in mathematics, cybernetics, behavioral theories and science fiction. The genius of Penck’s vision lies in his freedom to adapt his painting to address our contemporary situation.

A.R. Penck was born Ralf Winkler in Dresden in 1939. At a young age he showed great proficiency in painting and by his teenage years made several attempts to enter the academies in Dresden and East Berlin. His paintings’ politically charged content and determinedly un-academic style brought constant rejection from the establishment. In 1969 he adopted the pseudonym A.R. Penck, primarily to counter to his persistent difficulties with East German authorities which had made it all but impossible for him to exhibit his works publicly. His first dealer, Michael Werner, smuggled his paintings westward, eventually exhibiting in Cologne and West Berlin. Penck’s first solo museum exhibition came in 1971 at Museum Haus Lange, Krefeld; the following year he participated in documenta 5. Penck achieved international acclaim with his participation in the famous Zeitgeist exhibition at Martin-Gropius-Bau, Berlin in 1982, and New Art at London’s Tate in 1983. Today Penck is represented in public and private collections throughout the United States and Europe and he has been the subject of countless exhibitions worldwide. A major retrospective of his works in all media was originated at Schirn Kunsthalle Frankfurt in 2008 and later traveled to Kunsthalle Kiel and Musée d’Art Moderne de la Ville de Paris. An important survey of the artist’s felt sculptures was presented in 2012 at Museum Ludwig, Cologne. A.R. Penck lives and works in Dublin.

A.R. Penck: Between Light and Shadow is on view from 29 January through 28 March 2015 and will travel to Galerie Michael Werner, Märkisch Wilmserdorf in April. The exhibition is accompanied by a full-color catalogue. Gallery hours are Monday through Saturday from 10AM to 6PM. For more information please contact the gallery at press@michaelwerner.com.